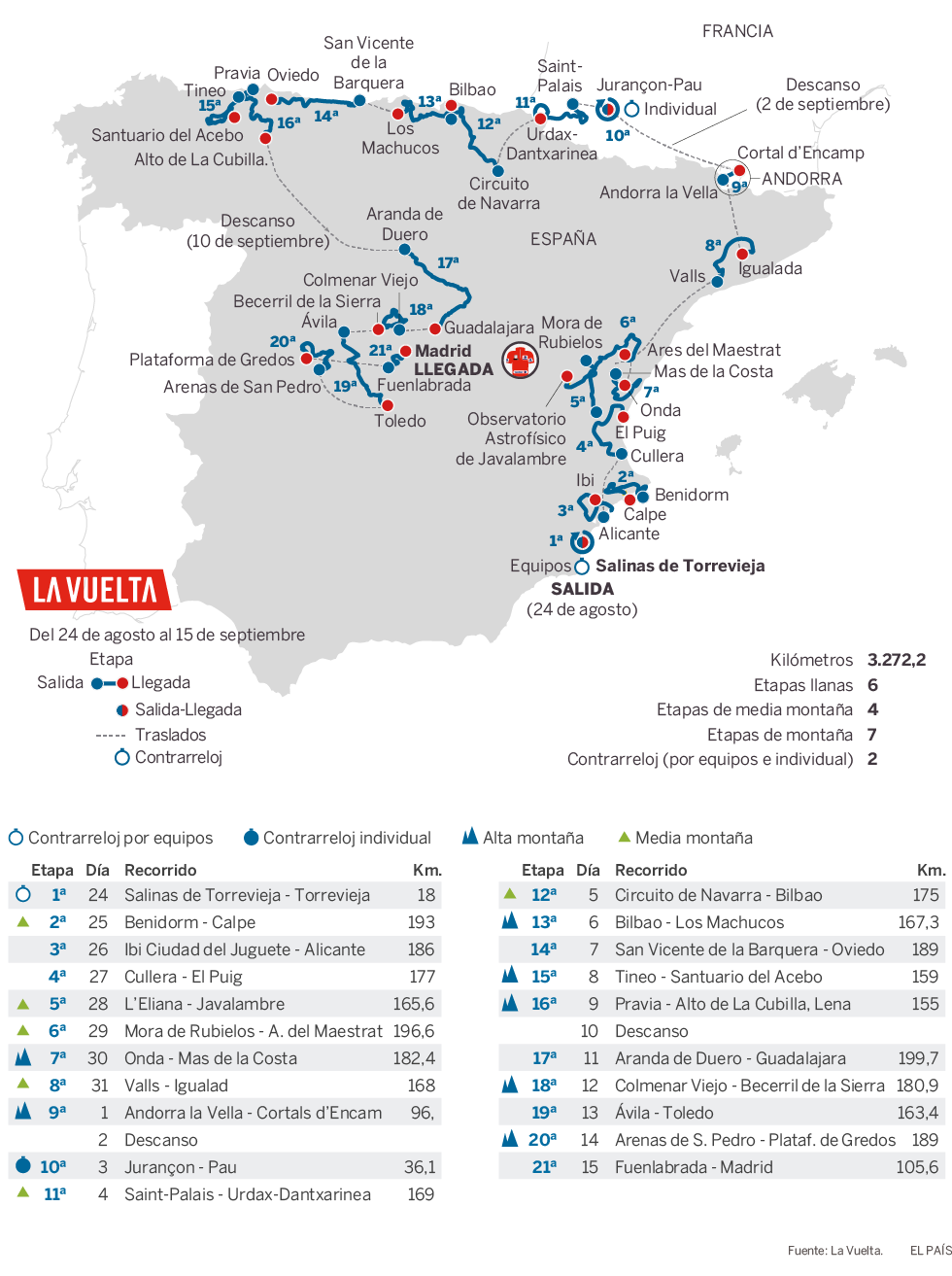 Vuelta 2019: week 1
The Gran Salida is in Las Salinas de Torrevieja, a Natural Park south of Alicante. It is also known as Torrevieja Pink Lake, as the lagoon is famous for this coloration.
The 1st stage is a team time trial on the flat.

Stage 2 runs from Benidorm to Calpe and stage 3 goes to Alicante. Albeit far from flat, these races are likely fast finishers showdowns, which definitely is the case in stage 4. This one will finish in El Puig, a town 15 kilometres north of Valencia.

Stage 5 is for the mountain goats as the riders face a tough summit finish on the Pico del Buitre. At 11.8 kilometres, the final climb leads to the Javalambre Observatory. The average gradient is hovering around 10% for most of the ascent.

The 6th stage runs on hilly terrain to a summit finish in Ares del Maestrat, while La Vuelta peps up its elevation profile in stage 7 with the short but ultra-trying finale on the slopes of the Alto Mas de la Costa. Just 3.8 kilometres long, but brutal. The average gradient is 9.9% and the steepest ramps are 21%.

Following another chance for sprinters or attackers in stage 8 the first week of action ends with the extremely demanding 9th stage in the mountains of Andorra. Cortals d’Encamp will serve as a finish at the end of a race of less than 100 kilometres. With the Ordino and Gallina climbs in the first part of the race, the final segment consists of three climbs in a row and 3.5 kilometres of dust road. The finale offers 22 kilometres of virtually continuous climbing.

On the 4th of September the riders head back to Spain. The 11th stage starts in Saint-Palais to finish in Urdax (or Urdazubi), where Valerio Conti soloed to victory in 2016. A Bilbao finish is scheduled for stage 12.

After Bilbao and Urdazubi the route takes in a summit finish on the Los Machucos in the 13th stage. The Spanish are talking about ‘rampas inhumanas’ when referring to this climb, which is 7.3 kilometres and see-sawing between ramps of 26% and 10% descents.

Oviedo will be included in La Vuelta for the first time since 1987, while the 15th stage finishes atop the Alto del Acebo – 10 kilometres at 8% – and the 16th stage at the Alto de La Cubilla, which is a grinding 20 kilometres long ascent.

Vuelta 2019: week 3
The 17th stage runs from Aranda de Duero to a likely sprint finish in Guadalajara, just north of Madrid, while stage 18 will be played out in the Sierra de Guadarrama, a mountain range close to the Spanish capital, where Fabio Aru won the 2015 Vuelta at the expense of Tom Dumoulin. This stage features intermediate climbs up the Puerto Navacerrada, Puerto de la Morcuera (twice) and Puerto de Cotos.

Stage 19 travels from Ávila to Toledo and is tailor made for fast finishers and the penultimate stage runs on hilly terrain from Arenas de San Pedro to Plataforma de Gredos.

The last stage is for the sprinters. The race starts in Fuenlabrada and finishes on a circuit in Madrid.